Bringing together these three lead stars, will provide a different adventure for its intended audience. It is directed by Veronica B. Velasco and is set to open in cinemas nationwide on July 17, Wednesday.

Also join the poll by logging on to its facebook page.

The Voice of the Philippines’ 3rd Week 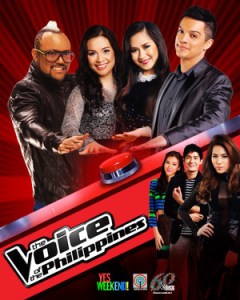 Since its premiere night on July 15, ‘The Voice of the Philippines’ has earned the kind of buzz and the following of Filipino fans as it heads on its third week with the country’s finest singing personalities as coaches and members of the judging panel.

To date, in last week’s episodes, three of the celebrity coaches have already recruited four team members each. Coach Apl has four, so as Coach Lea and Coach Sarah, but Coach Bamboo has only three.

Apl’s team members are: Sir Lord Lumibao, the Duo of Lorenzana siblings, Cora dela Cruz, and Thor Dulay. Lea, on the other hand also have four team members and they are: Radha of the formerly and now disbanded ‘Kulay’, Chien Berbana, Darryl Shy, and Taw Muhammad. The Pop Princess Sarah’s team members are: the two Cebuanos–Morissette Amon and Eva delos Santos, Michaellen Temporada, and Junji Arias. Bamboo is short of one team member as he picked three so far, and they are: Isa Fabregas, Lee Grane Maranan, and Deb Victa.

As early as now, it is predicted that Bamboo’s team member Lee Grane Maranan and Lea’s team member Radha will battle in the finals. However, Sarah’s fans might just surprise and upset the other contenders when text votes will start soon.

‘The Voice of the Philippines’ airs every at 9:00pm after Maalaala Mo Kaya, and on Sundays at 8:15pm after Rated K. It is hosted by Toni Gonzaga, while Robi Domingo, and Alex Gonzaga will serve as the show’s V-Reporters or media correspondents and backstage hosts, respectively. 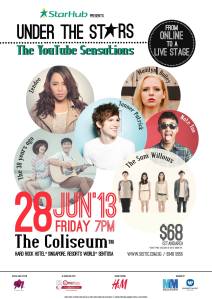 The Filipinos’ pride and YouTube sensation, Zendee will be the final act for a stellar concert titled, ‘Under the Stars: From Online to Live Stage’ on Friday, June 28 at The Coliseum of Resorts World Sentosa, 7pm, spearheaded by Singapore’s top communications company, Star Hub.

The said event is a three-hour musical extravaganza that gathers YouTube hit-makers to a whole new level of experience for both the stars and the audience. It will also feature Tanner Patrick (USA), Madilyn Bailey (USA), Nate Tao (USA), The 38 Years Ago (Thailand), and The Sam Willows (Singapore).

Along with her band, Zendee flew to Singapore earlier this week to bond with her fellow performers. Part of her trip, she intends to tour around the city during her spare time since it’s her first time to visit Singapore.

Zendee is also promoting her second single ‘The Ones You Love’ from her album ‘I Believe’ under Warner Music Philippines. For those living outside Singapore, a live streaming on the said concert is available via this link.