I thought I knew a good graduation speech until I saw Jim Carrey riff on love, consciousness and purpose

Such a powerful line that I can challenge myself too in the coming days.

Yes, I am writing a love story which I envision to be a novel and a film, someday. 🙂

Let me also quote Oprah Winfrey with her words: “What I know for sure is that if you want success, you can’t make success your goal. The key is not to worry about being successful, but to instead work toward being significant, and the success will naturally follow.”

Star Cinema brings together onscreen the newest tandem that perhaps Filipino movie fans would go gaga—Sarah Geronimo, the youngest coach ever among all ‘The Voice’ franchises in the world, will breathe into the character of Stephanie Asuncion who was once in love with Coco Martin’s role—Antonio Bugayong in the film ‘Maybe This Time’. 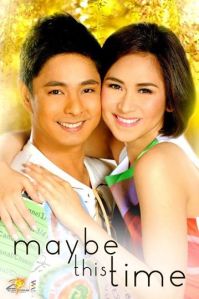 The paths of Stephanie and Antonio crossed again after time has parted them. Antonio left without saying goodbye to Stephanie when their love started to blossom and was heart-broken. The once simple young girl is now a career woman will be tested with her feelings toward Antonio, the ambitious guy who had board a ship to support his family’s furniture business and now involved with another woman named Monica T. Valencia, portrayed by Ruffa Gutierrez.

This is a story between two people who will be reminded about the importance of being true to one’s self in order for true love to happen. And if they won’t, what would be the consequences of such actions and decisions?

The film is predicted to be another blockbuster since casting Geronimo, a 2013 GMMSF Box-Office Entertainment Awardee for Box-Office Queen and Martin, the 12th Gawad Tanglaw Awards Best Actor in a TV Series for ‘Juan Dela Cruz’ are proven to have strong following and box-office statuses.

Jerry Lopez Sineneng directs this momentous film and will open on May 28 in cinemas nationwide.

Watch the trailer of the film. 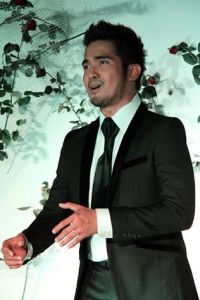 After his first concert on May 14 at the Opera Haus, one of the country’s topnotch tenors, Al Gatmaitan will have his second concert on May 23 at the LRI Design Plaza located at 210 Nicanor Garcia Street, Barangay Bel Air II, in Makati City.

This will be his last performance prior to taking his summer studies at the New York University Steinhardt School for Music and Performing Arts Professions in June.

Gatmaitan has trained at the UP College of Music major in voice and experiences in acting from various theatre groups such as Dulaang UP, UP Playwrights, Trumpets, Spazio Teatro and Teatro Calabria in Italy and Philippine Educational Theatre Association (PETA) where he started his career, honed him to be what he is today.

The concert is a special fund-raising initiative presented by The Philippine Opera Company and Grupo Reposo, also in collaboration with LRI Design Plaza, Karl Estudillo as collaborative pianist and Will Fredo as director.