Latest Article I wrote on Rappler.com

I was asked by my former PinoyWriters’ group member to cover for her in a recently concluded Bloggers’ Night for the Viva Films’ latest offering–‘Trophy Wife’.

Cristine Reyes and Derek Ramsey, the erstwhile partners team-up in this sizzling and suspense romantic-drama film–‘Trophy Wife’. Photograph by Ted Claudio of WazzupPhilippines.com.

MANILA, Philippines – Actor Derek Ramsay says that despite the awkwardness, he and actress Cristine Reyes were professional while making the movie The Trophy Wife together.

The two were previously an item, but are no longer dating.

“We’re both professionals and we’re both good friends. Had we not been friends, it could have been difficult, but it made it a lot easier for us to work smoothly,” Derek said during a recent screening of the movie.

‘Enemy’: A Film on Coming to Terms with One’s Self

In the many stories offered about characters having of the same face or look-alikes, this film that features Jake Gyllenhaal in ‘Enemy’, which is based on a 2002 novel by Portuguese author José Saramago, who won the Nobel Prize for literature and has a title—The Double, in Portuguese, it is translated as ‘O Homem Duplicado’ and literally means ‘The Duplicated Man’ is both spooky and disturbing in nature.

The novel found its English translation and was published as ‘The Double’ in 2004.

This film opened with a mystery for the audience to decipher, which probably most wouldn’t be able to decipher right away even when it reaches its conclusion.

This new film is directed by French-Canadian director Denis Villeneuve.

Gyllenhaal’s two characters in the film—Adam Bell and Anthony Claire are identical with each other that even their partners—Mary and Helen (portrayed by Mélanie Laurent and Sarah Gadon) couldn’t easily detect any difference between the two guys.

What is most interesting about the movie is Adam’s life. He is a college history assistant professor, but he has the tendencies to live a repetitive life as the film’s cinematography suggested some tinges of how Adam is verging into a boredom state, which is evident when he had a rough sex with his girlfriend Mary.

The film showed how he has lived a life that he wanted to get out from and it was his colleague who has suggested him to rent a DVD tape and in the movie, he discovered a bit actor that really look like him and his name is Anthony.

In the next scenes, he found himself stalking Anthony, the bit actor from the movie he rented out. It is where the conflict and the complication further ensue.

He met up with Anthony and since the actor wanted to get rid of him, traded places with him. Adam agreed that he will take on Anthony’s role as the husband to a pregnant wife named Helen. Anthony had sex with Adam’s girlfriend Mary and Adam also found himself having sex with Anthony’s wife.

The story presented not really that suspenseful but rather disturbing, a similar kind of drama found in our local television series, but only gave a different punch. Frankly, this film isn’t the type that an audience would come out entertained, but rather shocked especially with its ending when Adam has to embrace the life that Anthony has traded him with.

Discover how a tarantula signifies something in Adam’s journey to a life he probably would have wanted and forced to live with. Adam has to come to terms with his temptations and so as Anthony.

‘Trophy Wife’ promises to be Different from all Wife-Centered Flicks

Perhaps the most anticipated flick opening this week is Viva Films’ ‘Trophy Wife’, which clearly puts on Cristine Reyes as the lead star and ably supported by her erstwhile boyfriend-actor Derek Ramsay, Heart Evangelista, and John Estrada. 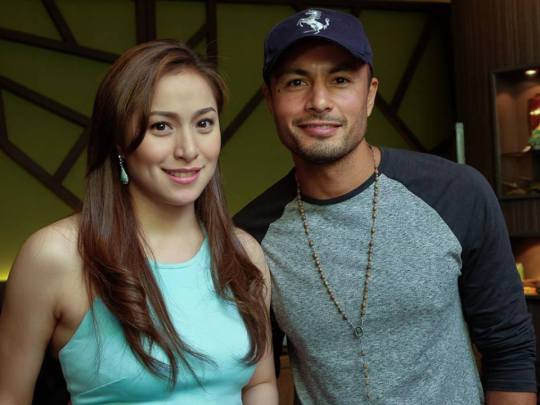 The erstwhile sweethearts–Cristine Reyes and Derek Ramsay plays Lani and Chino in this romantic-suspense-drama film ‘Trophy Wife’. Photograph by Ted Claudio of WazzupPhilippines.com.

This movie is of no relation to an American television sitcom that aired on ABC from 2013 to 2014.

The film is a one-year-in-the-making prior to Andoy Ranay taking over the directorial job, which made the movie possible for Filipino film buffs get the chance to watch this nearly shelved-off project of Reyes and Ramsay, which was when the two stars had their relationship blossomed and ended their relationship.

The cast of ‘Trophy Wife’ with director Andoy Ranay.

Apart from the controversial love scenes of Reyes and Ramsay in the film, the story written by Keiko Aquino attempts to present how a burning love and ambition can make this supposedly romantic-theme flick becomes dark and twisted all the same. John Estrada and Heart Evangelista showed sterling performances as Sammy and Gwen, respectively.

Cristine plays Lani, who becomes the young and attractive as well as regarded as the status symbol for John Estrada’s character, Sammy who is in his early 30s. However, Lani was also the ex-girlfriend of Chino, Sammy’s younger brother played by Derek Ramsay.

Ramsay said in a recently held bloggers’ night held at Greenbelt 3’s My Cinema, “This is a no other romantic film, “The movie, it’s the story that stands out. It’s not any of our characters.”

Also, the film’s glossy photography and cinematography will definitely appeal to this day’s generation of moviegoers.