He’s not running for political office this time, but he’s nominated at 2014 BroadwayWorld.com Philippines Award. 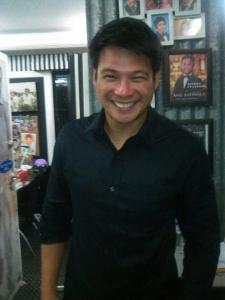 To quote Vladimir Bunuoan, deputy head for AB-CBNnews.com’s lifestyle, entertanment and sports sections wrote about Yul Servo in his review of the play the actor appeared recently, “Servo, who previously appeared in the stage adaptation of F. Sionil Jose’s ‘Mass’ and the one-act play ‘Isang Araw sa Karnabal’, captured Biff’s charisma but also gave slight hints of the character’s weakness in a nicely layered performance. But when Biff breaks down in front of his father and admits to his own failings and of being ordinary, it becomes a heartbreaking moment that defines the entire play. That scene alone is why ‘Pahimakas sa Isang Ahente’ matters and why it must be seen. It is also makes the point about why Servo deserves to be more successful despite the accolades he has received from his indie turns.”

Thus, he encourages his friends and contacts here on facebook as well as supporters of Hon. John Marvin Nieto a.k.a. Yul Servo to be the Next Best Crossover Artist (Mainstream to Theater) for the play ‘Pahimakas sa Isang Ahente’

Voting is only until December 30 and to cast the votes, click on the link.

Writer-Editor-Facilitator, Creative Strategist-Marketer, Publicist and PR Practitioner, Publisher and Social Entrepreneur.
View all posts by JudeisHere »
« ‘Bamboo Flowers’ honored in both International, Local Awards
‘Shrek The Musical’ is on its Last Two Day-Run »